Thanks to her role as the ancient Egyptian goddess of kindness and love, Hathor was one of the most popular deities, worshipped by pharaohs and queens through to ordinary people. Hathor also personified motherhood and joy, as well as being the goddess of foreign lands, music and dance and miner’s patron goddess.

Her instrument was the sistrum, which she used to inspire goodness and cast evil out of Egypt. Her cult origins remain unknown, however, Egyptologists believe her worship predates the beginning of Egypt’s Early Dynastic period.

Hathor was the popular goddess of fertility who assisted women during childbirth. The Egyptians also associated Hathor with the Milky Way, which they referred to as the Nile of the Sky. Another name attached to Hathor was “Mistress of the West” as ancient Egyptians believed it was Hathor who welcomed the dead into the Tuat.

Depictions Of The Cow Goddess 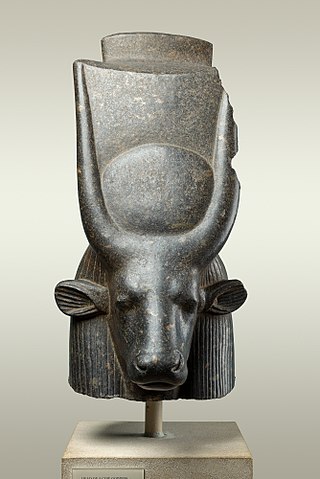 Hathor is typically shown as a woman with a cow’s head, cow’s ears or simply as a divine cow. In her Hesat form, Hathor is depicted as being a pure white cow carrying a tray of food on her head with udders flowing with milk.

Hathor is linked closely to Mehet-Weret the primeval divine cow. Mehet-Weret or “Great Flood” was a sky goddess believed to be responsible for the annual flooding of the Nile River, which inundated the land fertilising it and ensuring a bountiful season.

Inscriptions showing Hathor usually depict her as a woman wearing a stylized headdress, which evolved into her main symbol. Hathor headdress had two large upright cow horns with a sun-disc encircled by a divine cobra or uraeus resting between them. Other goddesses such as Isis that came to be associated with Hathor are usually shown wearing this headdress.

According to one myth, Hathor as the divine cow gave birth to the universe and some of the gods. Egyptian inscriptions have been discovered depicting Hathor in sky goddess form holding up the sky. In this manifestation, the four pillars holding up the sky were Hathor’s legs. Other legends recount how Hathor was Ra’s eye and leading ancient Egyptians to connect Hathor with Sekhmet a warrior goddess.

These myths tell how Hathor was infuriated by the Egyptians mistreatment of Ra. She metamorphosed into Sekhmet and began massacring the Egyptian people. Hathor’s fellow gods tricked her into drinking milk causing her to transform back into her Hathor form.

Hathor’s lineage also differs according to the version of the legend being recounted. Conventional Egyptian mythology depicts Hathor as Ra’s mother, wife and daughter. Other myths portray Hathor as Horus’ mother rather than Isis. Hathor was also Horus’ consort and together with Horus and Ihi formed a divine Triad.

Ancient Egyptians referred to Hathor as the “Mistress of Dendera,” her cult’s centre. Dendera was the capital of Upper Egypt’s 6th Nome or province. Her temple complex is one of Egypt’s best preserved and is spread across 40,000 square meters. A protective mud-brick wall surrounds this large temple complex.

The surviving buildings date back to the Ptolemaic Dynasty and early Roman periods. However, remnants of much older buildings have also been discovered on the site. Some large foundations have been dated back to the Great Pyramid era and the Pharaoh Khufu’s reign.

After archaeologists removed soot from a ceiling in one of the main halls, they uncovered some of the most well-preserved paintings in ancient Egypt yet discovered.

The precinct around Hathor’s temple revealed construction devoted to many other gods and goddesses including a series of chapels, one of which was dedicated to Osiris. Archaeologists also uncovered birth house in the temple as well as a sacred pool. A necropolis holding burials dating from the Early Dynastic Period through to the First Intermediate Period was also found in Dendera.

The Dendera Zodiac was an amazing discovery on the ceiling of the Osiris Chapel at Dendera. This zodiac is unique due to its round form rather than the conventional rectangular layout. A map of the sky as seen by the ancient Egyptians, it includes the signs of the zodiac, constellations and two eclipses.

Egyptologists date the zodiac to around 50 B.C. using the eclipses depicted in the map. However, some contend it is older. Many of the zodiac images shown are similar to Greek versions of the zodiac. Libra, the scales and Taurus, the bull is both shown. However, the ancient Egyptians substituted Hapy, their god of the Nile for the sign of Aquarius. The stars were important to the ancient Egyptians as they decided the start of a new year using Sirius, the Dog Star.

Hathor’s service to her followers was the cornerstone of her popularity. Archaeologists found her depicted in texts and inscriptions from Egypt’s Early Dynastic Period (c. 3150-2613 BCE) through the Ptolemaic Dynasty (323-30 BCE), Egypt’s last dynasty.