Surely one of the most enigmatic examples of ancient Egyptian art ever to come down to us through the passing centuries is the bust of Queen Nefertiti, the Pharaoh Akhenaten’s Great Royal Wife. Today she gazes unseeing towards her audience as confidently as if she was still seated on her throne.

Believed to have been crafted around c. 1345 B.C. by Thutmose a sculptor at the royal court who operated his workshop in Amarna, Egypt. Egyptologists believe Thutmose intended the bust to act as an apprentice model to assist Thutmose’s students model their own portraits of their queen.

Largely due to the brilliant execution of the study, Nefertiti has emerged as one of the most celebrated women known to us from the ancient world second only to her stepson Tutankhamun and has been adopted as an icon of idealized feminine beauty.

Facts About the Nefertiti Bust

Today, Nefertiti’s painted stucco-coated limestone bust is one of the most copied works to come to us from ancient Egypt. Yet German archaeologist Ludwig Borchard only discovered the bust on the 6th December 1912 at their Amarna dig site. Borchard was excavating the Tell al-Amarna dig site under a license held by the Deutsche Orient-Gesellschaft (DOG), or the German Oriental Company.

The bust was discovered in the ruins of the Sculptor’s Workshop together with a horde of unfinished busts of Nefertiti. Egyptian antiquity authorities suspect Borchardt of concealing the true value and importance of the bust at a meeting between a senior Egyptian official and representatives of the German Oriental Company.

A 1924 document discovered in the Deutsche Orient-Gesellschaft’s archives hints that Borchardt passed a photograph to the attending Egyptian official representing Egypt of the bust, “that didn’t show Nefertiti in her best light.” The meeting was to discuss the respective division of the 1912 archeological finds between Germany and Egypt

When Egypt’s chief antiquities inspector Gustav Lefebvre arrived for his inspection of the finds, the bust was already swaddled in a protective bundle and stowed in a crate. Examination of the document indicates Borchardt stated the bust was formed from cheap gypsum.

The German Oriental Company points the finger of blame at the inspector’s negligence. The company’s documents clearly show the bust topped the list of items to be discussed and goes on to outline the company’s vehement claims that the exchange was concluded fairly.

Nefertiti’s iconic bust is currently on display in Berlin’s Neues Museum and continues to be a source of friction between Egyptian and German governments.

The German museum continues to assert Borchardt lodged the required legal declaration describing his find prior to bringing the bust back to Berlin. The Egyptians for their part argue the bust was acquired under dubious conditions and so was exported illegally. Hence the Egyptian government firmly believes it should be repatriated home to Egypt. The Germans counter that the bust was acquired legally with the full agreement of the then Egyptian government and being their legal property should stay in its secure home at the Neues Museum.

Detail Of The Bust’s Design

Nefertiti’s bust stands 48 centimetres (19 inches) tall and weighs around 20 kilograms (44 lb). It is made from a limestone core with several layers of stucco overlaid on to the shoulders and the idiosyncratic crown. Computer tomography has revealed the painted surface conceals a layer of stucco applied to smooth out wrinkles, which were originally present. Remarkably, Nefertiti’s face is symmetrical and almost intact, missing only an inlay in its left eye to match the one in the right eye. The pupil of the right eye is fashioned from quartz with the pupil painted in black paint and held in place with beeswax. The eye-socket lining itself is the raw limestone.

Nefertiti wears her iconic blue crown or “Nefertiti cap crown” with a broad golden diadem band looping around it to join up at the back, and a cobra or Uraeus perched over her brow line. Nefertiti wears a broad collar with an embroidered floral pattern. Her ears have also suffered slight damage. 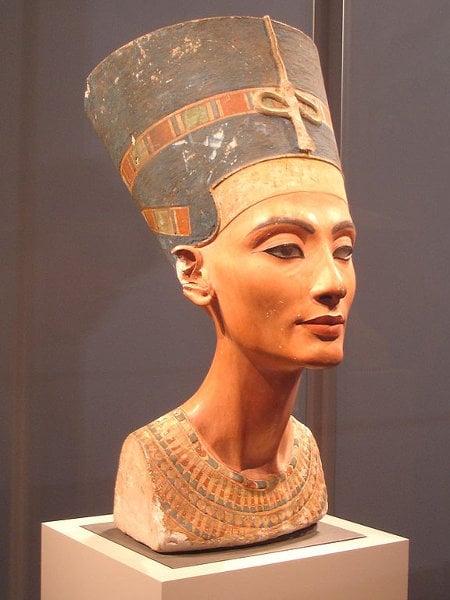 Nefertiti, which translates, as “the beautiful one has come forth” was the wife of the controversial Pharaoh Akhenaten. Nefertiti is believed to have been the daughter of Ay, the vizier to king Amenhotep III. Nefertiti’s father Ay was a tutor to the future Amenhotep IV and may have introduced Nefertiti to the prince when they were still children.

She is thought to have grown up in the royal palace at Thebes and by the age of eleven was engaged to Amenhotep’s son, the eventual Amenhotep IV. Certainly Nefertiti and Mudnodjame her sister regularly appeared at the royal court at Thebes so the two would have encountered each other regularly.

Ancient images and inscriptions support the view that Nefertiti was devoted to the cult of Aten. However, as every Egyptian routinely followed his or her own devotions as part of their normal life, there is no reason to suggest Nefertiti was an early proponent of either monotheism or of elevating Aten above the other gods in the ancient pantheon competing for followers amongst the ancient Egyptian populace.

Even today, Nefertiti retains her almost magnetic attraction for controversy. In 2003 CE Joann Fletcher a British archaeologist identified a mummy known as the “Younger Lady as matching surviving descriptions of Nefertiti. The Discovery Channel subsequent broadcast of Fletcher’s theory assumed the identity of the queen’s mummy had been confirmed. Regrettably, this was not the case. Egypt subsequently banned Fletcher from working in the country for a time. It seems final resolution of the mummy’s identity awaits a future discovery.

In 2003 this controversy was reignited when the Neues Museum allowed Little Warsaw, two artists to position the bust on a bronze nude to illustrate how Nefertiti may have appeared in real life. This ill-judged decision prompted Egypt to renew its efforts to repatriate the bust. However, the bust resides in the Neues Museum where it has been safely ensconced since 1913. Nefertiti’s alluring bust continues to be one of the museum’s signature artworks and a star of its permanent collection.

Rarely does an ancient work of art strike such a resounding chord with contemporary audiences as Nefertiti’s bust has done. The irony is it was originally merely a prototype for Thutmose’s apprentices.

You should put the date that you wrote this article.

The published date is always at the top of the article, just under the title.