Since Howard Carter discovered King Tutankhamun’s tomb in 1922, the world has been gripped by a mania for ancient Egypt. The find propelled Howard Carter a previously largely anonymous archaeologist to global fame, creating the world’s first celebrity archaeologist. Moreover, the lavish nature of the burial goods interred with King Tutankhamun for his journey through the afterlife set the popular narrative, which became obsessed with treasure and riches rather than developing insights into the ancient Egyptian people.

Howard Carter was born on May 9th, 1874, in Kensington, London He was the son of Samuel John Carter an artist and the youngest of 11 children. A sickly child, Carter was largely homeschooled at his aunt’s home in Norfolk. He displayed artistic skills from an early age.

The Amherst’s suggested Carter look for work in Egypt as a solution to his delicate health. They provided an introduction to Percy Newberry, a member of the London-based Egypt Exploration Fund. At that time Newberry was looking for an artist to copy the tomb art on behalf of the Fund.

In October 1891, Carter sailed for Alexandria, Egypt. He was just 17. There he took up a role as a tracer for the Egyptian Exploration Fund. Once on the dig site, Howard drew drawings and diagrams of important ancient Egyptian artefacts. Carter’s initial assignment was to copy scenes painted on the tomb walls of the Middle Kingdom (c. 2000 B.C) tombs at Bani Hassan. During the day, Carter Howard worked painstakingly copying the inscriptions and slept each night in the tombs with a colony of bats for company.

Carter became acquainted with Flinders Petrie, a famous British archaeologist. Three months later, Carter was introduced to the disciplines of field archaeology. Under Petrie’s watchful eye, Carter transitioned from artist to an Egyptologist.

Under Petrie’s guidance, Carter explored the Tomb of Tuthmosis IV, the Temple of Queen Hatshepsut, the Theban Necropolis and the cemetery of 18th Dynasty Queens.

From there, Carter’s archaeological career prospered and he became the main overseer and draughtsman at the Mortuary Temple of Hatshepsut dig site at Deir-el-Bahari in Luxor. At 25, a mere eight years after sailing to Egypt, Carter appointed Inspector General of Monuments for Upper Egypt by Gaston Maspero the Director of the Egyptian Antiquities Service.

This important position saw Carter supervising archaeological digs along the Nile River. Carter supervised the exploration of the Valley of the Kings on behalf of Theodore David an American archaeologist and lawyer.

As First Inspector, Carter added lights to six tombs. By 1903, he was headquartered at Saqqara and was appointed Inspectorate of Lower and Middle Egypt. Carter’s “stubborn” personality and very individual views on archaeological methodologies increasingly placed him at odds with Egyptian officials as well as his fellow archaeologists.

In 1905 a bitter dispute erupted between Carter and some wealthy French tourists. The tourists complained to senior Egyptian authorities. Carter was ordered to apologize, however, he refused. Following his refusal, Carter was assigned to less important tasks, and he resigned two years later. 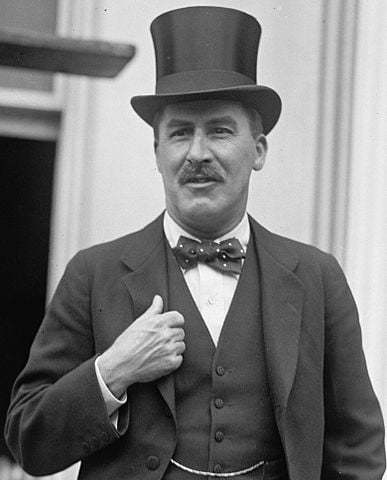 After Carter’s resignation, he worked as a commercial artist and tourist guide for several years. However, Maspero did not forget Carter. He introduced him to George Herbert, the 5th Earl of Carnarvon in 1908. Lord Carnarvon’s doctor had prescribed annual Egypt winter visits to help with a pulmonary condition.

The two men developed an extraordinary relationship. The Egyptologist’s unyielding determination was matched by the trust his sponsor invested in him. Lord Carnarvon, agreed to fund Carter’s ongoing excavations. Their productive collaboration resulted in the most famous archaeological find in history.

Carter supervised several excavations sponsored by Carnarvon together finding six tombs at Luxor on the Nile’s West Bank, as well as in the Valley of the Kings. These digs produced several antiquities for Lord Carnarvon’s private collection by 1914. However, Carter’s dream, which he became more and more obsessed with discovering King Tutankhamun’s tomb. Tutankhamun was a young pharaoh of Egypt’s 18th dynasty, a time when ancient Egypt enjoyed great wealth and power.

Prior to the name Tutankhamun, or King Tut entering popular culture, an inscription on a small faience cup first identified this little known pharaoh. This cup with the king’s name inscribed on it was unearthed in 1905 by Theodore Davis an American Egyptologist. Davis believed he had discovered Tutankhamun’s looted tomb following his discovered of an empty chamber now known as KV58. This chamber held a small cache of gold bearing the names of Tutankhamun and Ay, his successor.

Both Carter and Carnarvon believed Davies was wrong in assuming KV58 was Tutankhamun’s tomb. Moreover, no trace of Tutankhamun’s mummy was found among the cache of royal mummies found in 1881 CE at Deir el Bahari or in KV35 the tomb of Amenhotep II first discovered in 1898.

In their view, Tutankhamun’s missing mummy indicated his tomb remained undisturbed when the ancient Egyptian priests assembled the royal mummies for protection at Deir el Bahari. Moreover, it was also possible the location of Tutankhamun’s tomb had been forgotten and had avoided the attention of ancient tomb robbers.

Dogged determination and luck paid off for Carter. A mere three days after Carter’s digging season began on November 1, 1922 CE, Carter’s team discovered a hitherto overlooked staircase concealed beneath the ruins of workmen’s huts dating to the Ramesside Period (c. 1189 BC to 1077 BC). After clearing away this ancient debris, Carter stepped onto a newly discovered platform.

This was the first step on a staircase, which, after painstaking excavation, led Carter’s team to a walled-up doorway bearing the intact royal seals of King Tutankhamun. The telegram Carter dispatched to his patron back in England read: “At last have made wonderful discovery in Valley; a magnificent tomb with seals intact; re-covered same for your arrival; congratulation.” Howard Carter broke through the blocked up door to Tutankhamun’s tomb on November 26, 1922.

While Carter believed Tutankhamun’s tomb if intact could hold enormous riches, he could not have predicted the amazing cache of treasures awaiting him inside. When Carter first looked through the hole he chiselled in the tomb’s door, his only light was a solitary candle. Carnarvon asked Carter if he could see anything. Carter famously replied, “Yes, wonderful things.” Later he remarked that everywhere there was the gleam of gold.

The debris covering the tomb entrance may explain why Tutankhamun’s tomb largely escaped the depredations of ancient tomb robbers around the end of the 20th Dynasty in the New Kingdom period (c.1189 BC to 1077 BC). However, there is evidence the tomb was robbed and resealed twice following its completion.

The sheer scale of their find and value of the artefacts sealed in the tomb prevented the Egyptian authorities from following the established convention of dividing the finds between Egypt and Carnarvon. The Egyptian government claimed the contents of the tomb.

King Tutankhamun’s final resting place was the best-preserved tomb ever discovered. Inside it was a fortune in gold artefacts, together with King Tutankhamun’s three nestled sarcophaguses resting undisturbed within the burial chamber. Carter’s discovery was to prove to be one of the 20th-century’s most astonishing discoveries.

King Tutankhamun’s tomb contained so many treasures it took Howard Carter 10 years to fully excavate the tomb, clear away its debris and painstakingly catalogue the funerary objects. The tomb was closely packed with hordes of objects strewn in great disarray, partly due to the two robberies, the rush to complete the tomb and its comparatively compact size.

In all, Carter’s spectacular discovery yielded 3,000 individual objects, many of them pure gold. Tutankhamun’s sarcophagus was carved from granite and had two gilded coffins and a solid gold coffin nestling inside them together with Tutankhamun’s iconic death mask, today one of the world’s most well-known artistic works.

Four gilded wooden shrines surrounded the king’s sarcophagus in the burial chamber. Outside these shrines were eleven paddles for Tutankhamun’s solar boat, gilded statues of Anubis, containers for precious oils and perfume and lamps with decorative images of Hapi, a water and fertility god.

While Carter’s discovery imbued him with a celebrity status, today’s Instagram influencers could only dream of, he did not appreciate the media’s attention.

While Carter pinpointed the tomb’s location early in November 1922, he was forced to await the arrival of Lord Carnarvon his financial patron and sponsor before opening it. Within a month of opening the tomb in the presence of Carnarvon and his daughter Lady Evelyn on 26 November 1922, the dig site was attracting streams of spectators from around the world.

Carnarvon did not dispute the Egyptian government’s decision to press its claim for full ownership of the tomb’s content, however, aside from desiring a return on his investment Carter and his archaeological team needed funding to excavate, preserve and catalogue the thousands of tomb objects.

Carnarvon solved his financial problems by selling the exclusive rights to coverage of the tomb to the London Times for 5,000 English Pounds Sterling up front and 75 per cent of the profits from the worldwide sales of their articles to third party-publishers.

This decision enraged the world press but greatly relieved Carter and his excavation team. Carter now only had to deal with a small press contingent at the tomb rather than having to navigate a media throng enabling his and team to continue their excavation of the tomb.

Many press corps members lingered in Egypt hoping for a scoop. They didn’t have to wait long. Lord Carnarvon died in Cairo on 5 April 1923, less than six months after the tomb was opened. “The Mummy’s Curse was born.”

To the outside world, the ancient Egyptians appeared obsessed with death and magic. While the concept of ma’at and the afterlife lay at the heart of ancient Egypt’s religious beliefs, which included magic, they did not make extensive use of magical curses.

While passages from texts such as the Book of the Dead, the Pyramid Texts, and the Coffin Texts contained spells to help the soul navigate the afterlife, the cautionary tomb inscriptions are simple warnings for grave robbers as to what happens to those who disturb the dead.

The prevalence of tombs looted in antiquity indicates how ineffective these threats were. None protected a tomb as effectively as the curse created by the imagination of the media during the 1920s and none achieved a similar level of fame.

Howard Carter’s discovery of Tutankhamun’s tomb in 1922 was international news and following fast on its heels was the tale of the mummy’s curse. Pharaohs, mummies and tombs attracted significant attention prior to Carter’s find but achieved nothing like the level of influence in popular culture enjoyed by the mummy’s curse afterwards.

Howard Carter achieved everlasting fame as the archaeologist who discovered the intact tomb of Tutankhamun’s in 1922. Yet this moment of triumph was presaged by years of hard, uncompromising field work in hot, primitive conditions, frustration and failures.