The earliest evidence of jewellery making in ancient Egypt dates to 4000 BC. Today, ancient Egyptian jewellery has gifted us with some of the rarest and most sublime examples of ancient craftsmanship discovered to date.

Both men and women in ancient Egypt proved themselves to be great admirers of jewellery. They adorned themselves with a profusion of trinkets in their everyday lives and in their burials.

Jewellery indicated status and wealth while offering protection against evil and curses. This protection was extended to the dead as well as the living and was believed to usher in prosperity during the present and the afterlife.

Putting The Personal Into Adornment

Perhaps the moment in time that later came to define the emergence of Egyptian jewellery design and craftsmanship was their discovery of gold.

Gold mines enabled Egyptians to accumulate vast quantities of the precious metal, which formed the backdrop for the creation of Egypt’s exquisitely intricate jewellery designs.

The ancient Egyptians were passionate in their love of personal adornment. Hence, jewellery adorned both women and men of all social classes.

Egyptian statues of their gods and pharaohs were embellished with lavish jewel decorations. Similarly, the dead were entombed with their jewellery to aid them on their journey into the afterlife.

Their personal adornment was not limited to rings and necklaces. Anklets, armbands, elaborate bracelets, amulets, diadems, pectorals and collar pieces; pendants, necklaces, delicate earrings and a profusion of rings were a customary feature of Egyptian dress.

Even in their burials, the poorest would still be interred wearing rings, a simple bracelet or a string of beads.

It became a focus for families of the nobility, and royals as a means of differentiating them from the general populace. Gold’s status generated a huge demand for elaborate items of jewellery.

Masters Of Their Craft 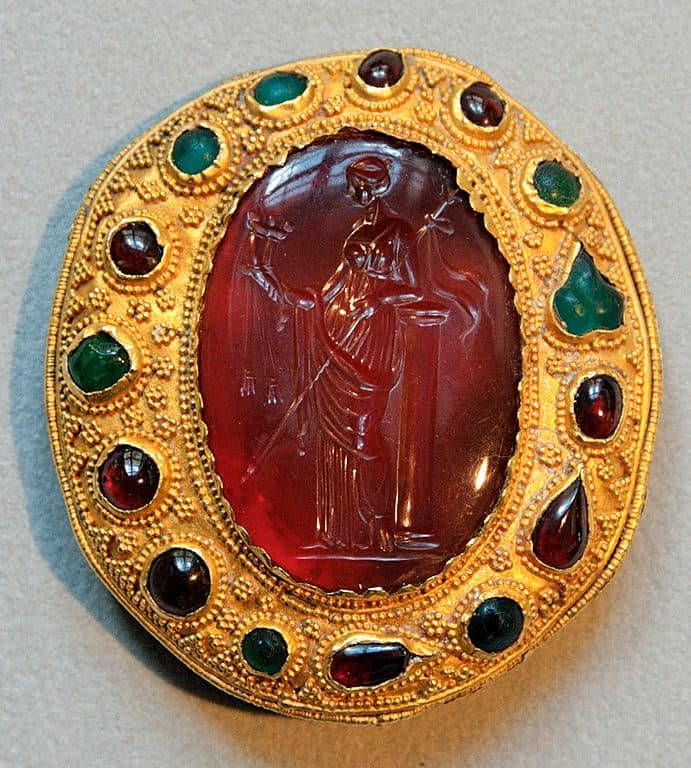 Regrettably, much of the ancient Egyptian techniques for cutting and polishing their precious and semi-precious gemstones are now lost to us, but the enduring quality of their creations are still with us today.

While the ancient Egyptians enjoyed access to a dizzying range of precious gemstones, they often opted to work with softer, semi-precious gems such as turquoise, carnelian, lapis lazuli, quartz, jasper and malachite.

One commonly used and breathtakingly expensive material was coloured glass. Exorbitantly expensive thanks to its rarity; Egyptian jewellers made creative use of coloured glass to represent exquisitely detailed feathers of their bird designs.

In addition to the gold mines and other raw materials available within Egypt’s borders, Egypt’s jewellery master craftsmen imported a host of other materials such as lapis lazuli a popular semi-precious stone featured extensively in scarab jewels.

Thanks to the Egyptian tradition of concealing their burials in inaccessible locations, archaeologists have found large quantities of these perfectly preserved masterpieces. 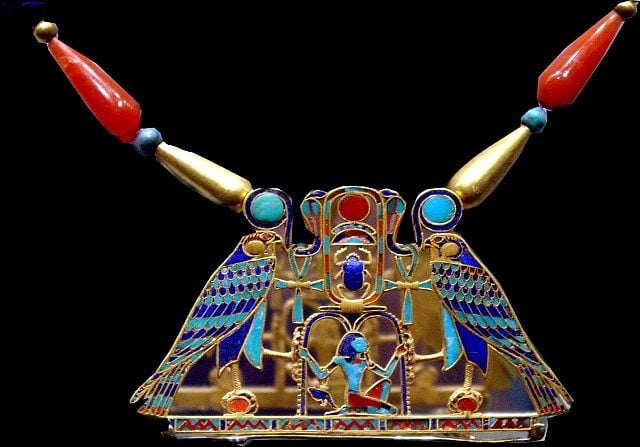 Pendant found in the tomb of Princess Sit-Hathor Yunet, the daughter of Pharaoh Senusret II and is made from gold of carnelian, feldspar, garnet, turquoise and lapis lazuli.
tutincommon (John Campana) / CC BY

The colour of their gemstones and their jewellery was important to the ancient Egyptians. Certain colours were believed to bring good fortune whilst conveying protection against evil.

In numerous ancient cultures, the colour blue represented royalty. This was particularly the case in ancient Egyptian society. Hence, lapis lazuli with its intense blue shade was one of the most treasured gemstones.

Specific colours, ornamental designs and materials were connected with supernatural deities and unseen powers. The colour of each gemstone held a different meaning amongst ancient Egyptians.

Green coloured jewellery symbolized fertility and the success of freshly planted crops. A recently deceased individual would be interred with a red-coloured necklace around their throat to quench Isis‘s supposed thirst for blood.

The ancient Egyptians wore the ornamental jewellery as talismans to protect them against hostile entities. These talismans were crafted from stone.

Turquoise, carnelian and lapis lazuli all represented one facet of nature such as green for spring, orange for the desert’s sand or blue for the sky.

Gold in ancient Egyptian jewellery represented the flesh of their gods, the sun’s eternal majesty and fire and an everlasting constancy.

Seashells and freshwater molluscs featured prominently in crafting both men’s and women’s necklaces and bracelets. To the ancient Egyptians, a cowrie shell resembled the slit of an eye. Egyptians believed this shell protected its wearer against the evil eye.

Egyptian society was very traditional and conservative in its beliefs. Their jewellers followed strict rules governing the mystical attributes of their jewellery designs. These designs could be read like a narrative by an informed observer. 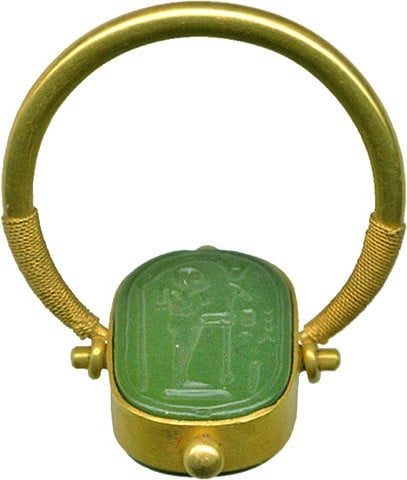 Emerald was Queen Cleopatra‘s favourite gemstone. She had her jewellers carve emeralds in her likeness, which she gave as gifts to foreign dignities. Emeralds were mined locally in ancient times close to the Red Sea.

Egypt monopolized the trade in emeralds until the 16th century and the discovery of Central and South America. Ancient Egyptians equated emeralds to their concepts of fertility and rejuvenation, immortality and eternal spring.

Ancient artisans became so skilled at crafting glass bead facsimiles of precious and or semi-precious stones that distinguishing the real gem from the glass fake was quite difficult.

In addition to the gold used for jewellery destined for royalty and the nobility, copper was used extensively for mainstream jewellery. Gold and copper were both abundant thanks to Egypt’s Nubian Desert mines.

Silver generally was not available to craftsmen in Egypt and is rarely encountered in archaeological excavations. The silver that was used was all imported adding to its cost.

To achieve different colours in their gold creations, jewellers use different tints of gold, which ranged from reddish brown and rose to shades of grey. Blending copper, iron or silver with the gold created this variation in tints. 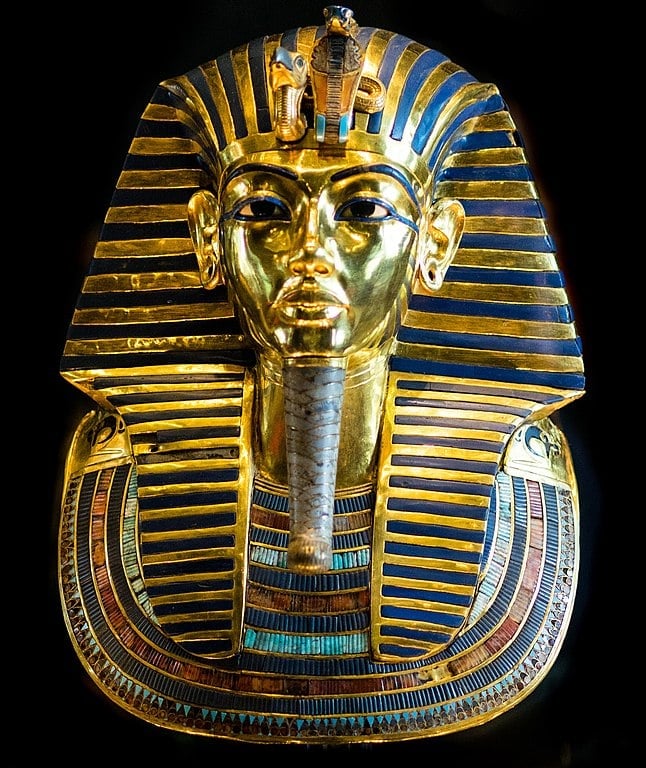 The more luxuriant examples of Egyptian jewellery were inlaid with a range of precious and semiprecious gemstones.

Lapis lazuli was the most treasured stone, while emeralds, pearls, garnet; carnelian, obsidian and rock crystal were the most frequently used stones native to Egypt.

The Egyptians also were skilled in manufacturing faience for their jewellery. Faience was made from grinding up quartz then mixing it with a colouring agent.

The resulting mix was then heated and moulded to imitate more expensive gems. The most popular shade of faience was a blue-green tint that closely mimicked turquoise. 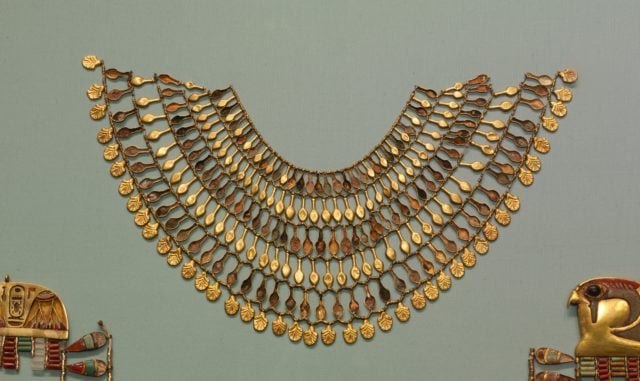 While everyday objects and clothing may have been comparatively plain, Egyptian jewellery was unapologetically ornate. Regardless of class or gender, every ancient Egyptian owned at least some jewellery.

The most popular items of jewellery included lucky charms, bracelets, beaded necklaces, heart scarabs and rings. Noble Egyptians, such as the pharaohs and queens enjoyed jewellery crafted from a mix of precious metals and gemstones and coloured glass. 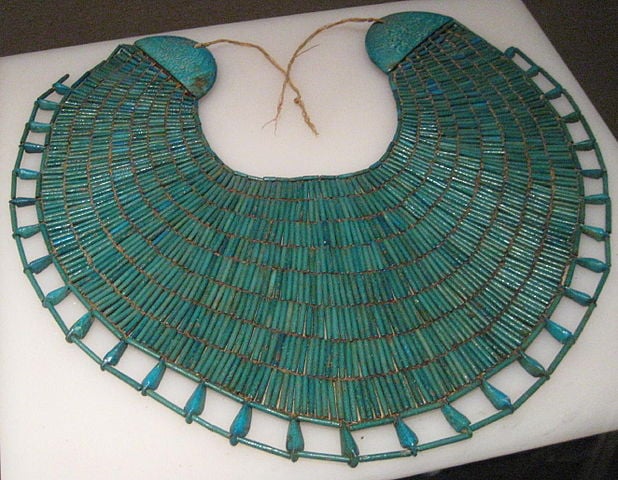 One of the most iconic ornaments that have come down to us from ancient Egypt is their wide collar necklace. Typically fashioned from rows of beads shaped like animals and flowers, the collar stretched over its wearer from the collarbone to the breast.

Amulet from the Egyptian Ptolemaic Period. Made from Gold with inlays of lapis lazuli, turquoise, and steatite.
Los Angeles County Museum of Art / Public domain

Egyptian protective amulets were often incorporated into jewellery but equally could be worn as independent items. These charms or amulets were talismans thought to protect its wearer.

Amulets were carved into a range of different forms and shapes, including humans, animals, symbols and representations of the gods. These amulets conferred protection on both the living and the dead.

Amulets were important in the afterlife and many examples were created as memorial jewellery specifically for the afterlife, following the ancient Egyptian custom of leaving grave goods to accompany the departed soul in the afterlife.

The Egyptian scarab beetle played a significant role in mythology. Consequently, the rich and poor alike adopted the scarab as a good luck charm and an amulet.

Scarab jewellery was thought to possess strong magical and divine powers. Moreover, the humble scarab was an Egyptian symbol for rebirth. 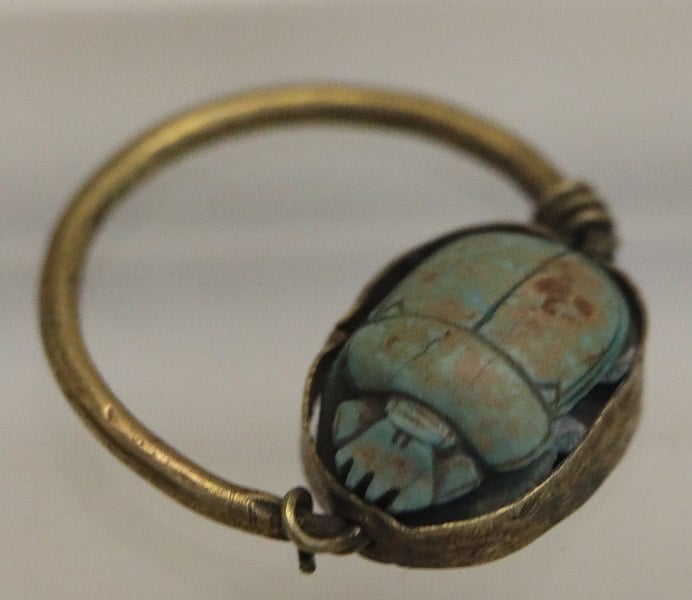 The owner’s name was inscribed on the scarab’s base to ensure its protection was granted to its wearer.

Scarab jewellery in the form of necklaces, pendants, rings and bracelets were created from precious or semi-precious stones including lapis lazuli, turquoise and carnelian. 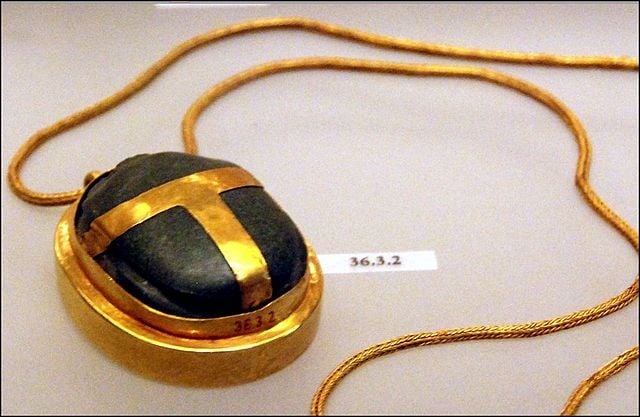 Gold and green stone heart scarab from the 18th dynasty. Found in the tomb of Ramose and Hatnofer.
Hans Ollermann / CC BY

One of the most common Egyptian funerary amulets was the heart scarab. These were occasionally heart-shaped or oval, however, they usually retained their distinctive beetle shape.

Their name originated from the practice of placing an amulet over the heart prior to burial.

The ancient Egyptians believed it compensated for the heart’s separation from its body during the afterlife. The heart chronicled a soul’s actions in life, according to Egyptian mythology.

So, upon their death, the god Anubis would weigh the hearts of the departed souls against the Feather of Truth. 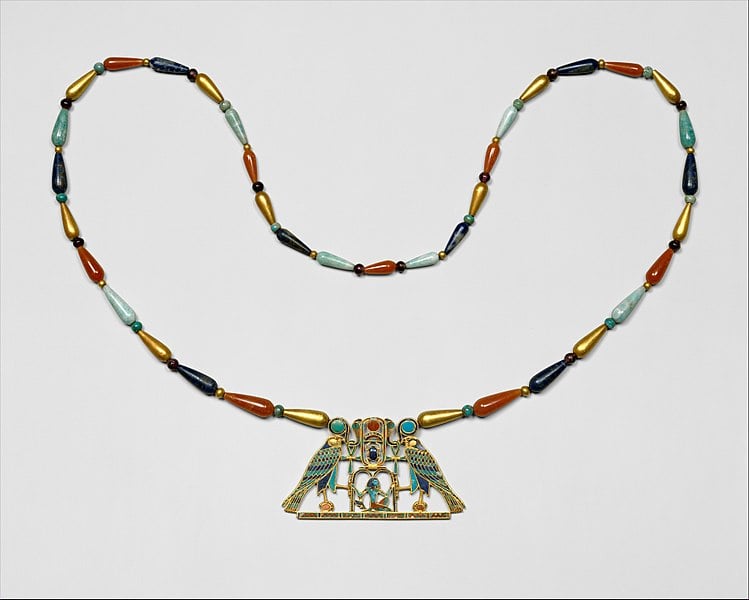 Necklace of Sithathoryunet from the Middle Kingdom period.
Metropolitan Museum of Art / CC0

Intricately beaded necklaces were amongst the most popular items of Egyptian jewellery in their day. Typically, beaded necklaces often incorporated amulets and charms, into their intricate designs of different shaped and sized beads.

The beads themselves could be fashioned from semi-precious stones, glass, minerals and clay. 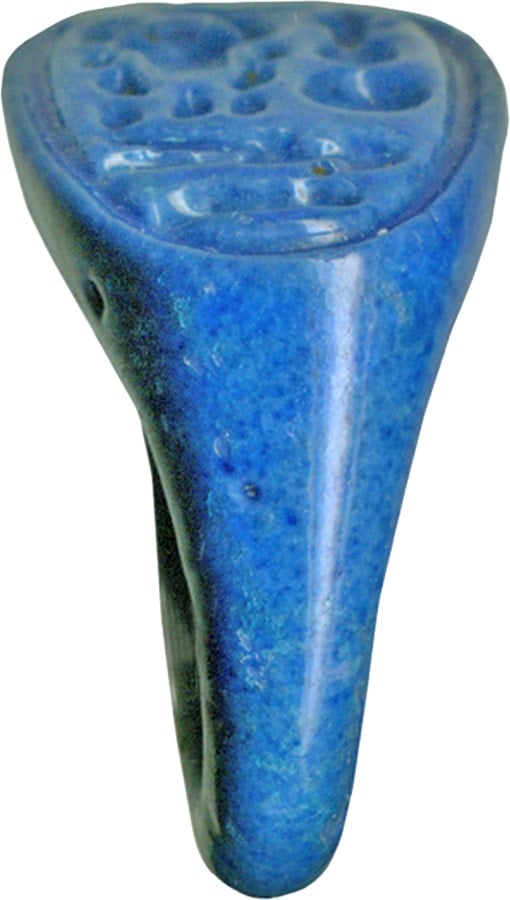 A man’s ring in ancient Egypt was as much legal and administrative instruments as they were ornamental. All official documents were formally sealed, as a form of authentication. 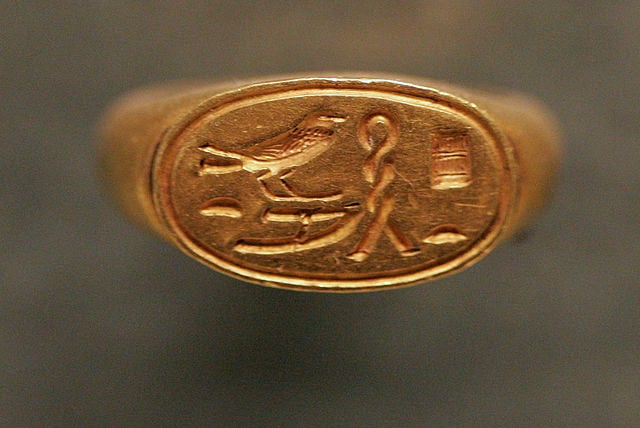 The ring would be engraved with its owner’s personal emblem such as a hawk, an ox, a lion or a scorpion.

Ancient Egyptian jewellery is amongst some of the most breathtakingly ornate cultural artefacts ever found. Each piece tells a unique story. Some are artefacts of mystical power others contain talisman’s protecting their wearer against evil magic and dark curses.