Strategically, Egypt was blessed with imposing natural defensive lines. Egypt’s swath of desert made the country a difficult target for invasion. The Mediterranean Sea protected Egypt’s northern border while the five cataracts of the mighty Nile River guarded its southern border.

Socially, the Egyptians enjoyed the advantage of being culturally and ethnically unified, an advantage when it came to maintaining civil governance and facing down external threats.

The dual role of the Egyptian Pharaoh, a king who was also considered to be the Earthly manifestation of a god helped keep Egypt unified. For hundreds of years, Egypt’s wealth grew, their people were secure within their borders and their cities had no need of expensive defensive walls.

There were periodic invasions by the Nubians to their south and Libyan armies to Egypt’s west. Not all Egypt’s attempts to repel these invasions proved successful.

Sometime around 1700 BC, Hyksos to Egypt’s north mounted a major invasion of Egypt bringing the first horses into Egypt and introducing the Egyptian army to mobile warfare by employing chariots against the more static Egyptian infantry formation. 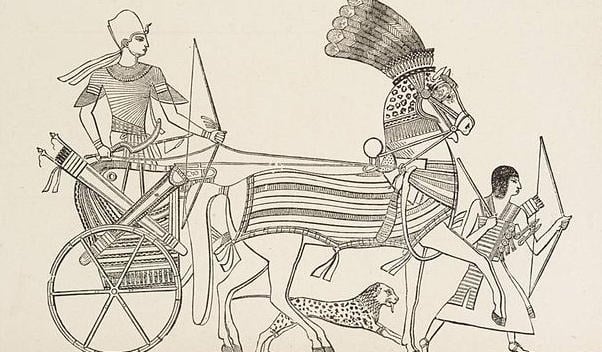 Moreover, the Egyptian Pharaoh’s sought to conquer vast areas of the Levant, today’s Israel and launched invasions of Nubia in what is modern Sudan.

As is the case with all armies, the ancient Egyptian military was a product of the Egyptian society that created it. Socially, Egypt was conservative. This surfaced in its military’s consistent lack of innovation.

However, the Egyptian military’s pragmatic attitude saw it adopt enemy strategies, technology and weapons. Egypt emerged as one of the military powerhouses of the ancient world and for a time, one of history’s great military forces.

Dawn of Warfare: Ancient Egypt’s Pre-Dynastic Campaigns (prior to 3100 BC)

The first archaeological evidence of a possible prehistoric battle was found on the Nile approaching the border of Egypt and Sudan. The Cemetery 117 site has been dated to between 13,140 to 14,340 years ago.

Cemetery 117 contained 59 skeletons and numerous partial skeletons. Many of the remains had arrowheads or spear points embedded in them. The wounds show no signs of healing, indicating they may have been battle casualties.

Archeologists have discovered a series of Nile cultures reaching from the 14th millennium BC to the Dynastic period. By 5500 BC, farming communities had adapted to the Nile’s annual floods and had become proficient in animal husbandry, generating food surpluses. As these societies evolved, so too did the complexity of warfare. Small raiding tactics transformed into armies.

History’s first representation of siege warfare is in reliefs showing sieges and wheeled siege ladders. By 3150 BC, Upper Egypt had defeated the two rival kings and now controlled all Egypt. The king Narmar, the mythical Scorpion King is the first known king to be shown holding the symbols of a united Upper and Lower Egypt.

During the archaic period (3100 BC – 2686 BC), Egypt’s military was a conscript force raised as needed to defend against small-scale raids. In battle, the Egyptian signature tactic was to weaken the opposing force with the Egyptian’s weapon of choice, the bow and arrow. Once an enemy formation was in disarray from their volleys of arrows, the Egyptian infantry assaulted the enemy formation.

The Old Kingdom is considered by scholars to be a golden age for Egypt. Egyptian power expanded and the country was rich and influential. This financial power was injected into a huge military construction program building a series of forts in strategic locations.

These forts were designed to prevent incursions by the Sinai and Canaanite tribes in the Northeast and the Libyans in the West. Nubia was the source of a protracted conflict during this time in the South. A string of Forts were constructed on territory captured from them to protect Egypt proper from Nubian depredations.

During the Old Kingdom, Egypt continued its tradition of conscription and didn’t establish a standing army. Governors of Egypt’s Nomes provinces raised armies to meet local threats. When a major force was required the individual armies of the Nomes joined together under the command of the Pharaoh.

As the Old Kingdom Pharaoh’s focused on building their pyramids, power gradually fell into the hands of the Governors of the Nomes. With the death of the 94-year old Pharaoh Pepy II Egypt descended into civil war. Militarily Egypt would never be as secure as it was during the Old Kingdom. The Pharaoh now faced new adversaries rising in the near East.

The advent of the Middle Kingdom was a time of struggle for a succession of Pharaohs. Their trade routes came under intense pressure. Egypt’s borders had reached the limits of their expansion and the Pharaoh’s settled for maintaining the status quo with opposing Near East empires.

Senusret III, (1878 BC to 1839 BC) constructed massive river forts including those at Buhen, Semna and Toshka to protect Egypt’s new border. The Egyptian military was similar to its the Old Kingdom predecessors both organizationally and tactically. Conscripted peasants comprised the bulk of the army, although the permanent garrisons enhanced their professionalism.

The militarily powerful Hyskos took over the Egyptian capital Memphis and dominated the Nile Delta. This ushered in the Second Intermediate Period. Their use of the chariot is commonly credited with facilitating the Hyskos dominance over the Egyptians.

The Pharaohs in Thebes retrained their army, adopted the deadly composite bow and built their own light, fast war chariots. A series of campaigns against the Hyskos ensued.

Warfare In The New Kingdom

The New Kingdom (1570 BC – 1070 BC) was a time of disruptive change for Egypt’s military forces. The Egyptians had learned from their defeat by the Hyskos and reformed their military.

A wealthy warrior class drawn from the nobility joined the army as charioteers equipped with powerful composite bows. The Egyptians made lighter, more mobile two-horse chariots than their contemporaries.

The chariots were the armour of the battlefield during their day. They combined speed and maneuverability enabling them to attack at long range. The Egyptians deployed their chariots as mobile artillery rather as shock troops tasked with disrupting enemy formations. Uniquely Egyptian chariots were state-owned, rather than provided by individual warriors.

Around this time the Egyptian infantry introduced a unique sword, the khopesh into service. This iconic weapon was well balanced for slashing and stabbing and featured a hook on one side of the blade. Egyptian infantry also adopted scale armour.

During the New Kingdom, the Egyptian military morphed into professional soldiers. Maintaining their Nubian conquests required a permanent garrison force. Encounters with powerful kingdoms such as the Mitanni, Hittites, and later the Assyrians and Babylonians, necessitated conducting campaigns far from home. Egyptian infantry troops adopted large square formations organized by weapon specialities such as archers, swordsmen or spearmen.

The battle of Kadesh, the largest chariot battle in history involved 5,000 to 6,000 chariots when Ramesses II fought the Hittites. The resulting impasse produced the earliest international peace treaty.

In c.1178 BC the army of Ramesses III met the Sea Peoples on Egypt’s Eastern frontier at the Battle of Djahy and defeated them. Ramesses III credited his victory to his force of chariots according to inscriptions describing the battle. This was followed by another victory at the Battle of the Delta, an epic sea battle.

However, the conflict with the Sea Peoples exhausted the Egyptian military and emptied the treasury. Egypt never again recovered its power as an empire. After Ramesses III repelled the Sea Peoples, the Nubians and Libyans invaded Egypt.

Protracted internal conflict also contributed to the fall of Egyptian power as a sect of priests competed with the Princes for power in the New Kingdom ushering in the “Third Intermediate Period”. The Sheridans and Libyans won control of the Western regions of the Nile Delta while the Nubians wrestled away control of Upper Egypt.

A fatally weakened Egypt was then unable to counter an Assyrian invasion and the Nile became part of the Assyrian Empire. Egypt was then ruled in succession by the Assyrians, Persians and finally by the Romans. Egyptian military was never again a force to be reckoned with in the ancient world.

Was the Pharaoh’s policy of appeasing the priests by stifling innovation and enterprise ultimately responsible for the decline of the ancient Egyptian military power leaving them vulnerable to conquest?