Around 4000 BC the Egyptians began importing Red Sea obsidian via its trading routes. This incredibly sharp volcanic glass was fashioned into blades for weapons. Obsidian glass has characteristics endowing it with a keener point and edge than even the sharpest of metals. Even today, these phenomenally thin; razor-sharp blades are utilised as scalpels.

The Bronze Age and Standardisation

As the thrones of Upper and Lower Egypt were unified and their society consolidated around 3150 BC, Egyptian warriors had adopted bronze weapons. Bronze was cast into axes, maces and spearheads. Egypt also embraced composite bows for its armies around this time.

In the centuries to follow as the Pharaoh’s consolidated their domination of ancient Egypt’s social, economic, political and religious structure they initiated measures aimed at standardizing their weaponry, created garrison arsenals and stockpiled weapons for use on overseas campaigns or in times of enemy invasion. They also borrowed weapons systems from their encounters with invading tribes.

Perhaps the most iconic and formidable weapons system borrowed by the ancient Egyptians was the chariot. These two-man weapons systems were fast, highly mobiles and proved to be one of their most formidably effective offensive weapons.

The Egyptians built their chariots lighter than those of their contemporaries. Egyptian chariots held a driver and an archer. As the chariot rushed toward an enemy formation, the archer’s job was to aim and shoot. A good Egyptian archer was able to maintain a firing rate of an arrow every two seconds. This tactical employment of their mobile artillery enabled Egyptian forces to put a continual supply of arrows into the air to fall on their enemy like lethal hailstones.

In Egyptian hands, chariots represented a weapons platform rather than an actual assault weapon. The fast, light Egyptian chariots would sweep into position just out of bowshot from their enemies, shower their opponents with arrows using their more powerful, longer-ranging composite bows before retreating safely before their enemy could launch a counter attack.

In 1274 BC at the Battle of Kadesh, some 5,000 to 6,000 chariots are reported to have pummeled each other. Kadesh saw heavier three-man Hittite chariots opposed by the faster and more maneuverable Egyptian two-man chariots in what was probably the largest chariot battle in history. Both sides emerged claiming victory and Kadesh resulted in the first known international peace treaties being signed.

As well as their powerful composite bows, Egyptian charioteers were supplied with spears for close-quarter combat.

Depiction of Tutankhamun in an Ancient Egyptian Chariot.

The bow was the mainstay of Egypt’s military throughout the country’s lengthy military history. In part, the bow’s enduring popularity was due to the absence of protective body armour worn by Egypt’s opponents and the searing, humid climate where their forces were employed.

Ancient Egypt’s military use both the standard longbow and the more complex composite bow continuously for the duration their military dominance. In the pre-dynastic period, their original flaked stone arrowheads were replaced by obsidian. By 2000BC obsidian appears to have been displaced by bronze arrowheads.

Finally, domestically forged iron arrowheads began appearing in Egyptian armies around 1000BC. The majority of Egypt’s archers marched on foot, while each Egyptian chariot bore an archer. Archers provided mobile firepower and operated at standoff ranges in the chariot teams. Unleashing the range and speed of chariot-mounted archers tactically enabled Egypt to dominate many battlefields. Egypt also recruited Nubian archers to its ranks of mercenaries. The Nubians were amongst their finest bowmen.

Together with the chariot, the Khopesh is undoubtedly the Egyptian military’s most iconic weapon. The Khopesh’s distinguishing feature is its thick crescent-shaped blade measuring about 60 centimeters or two feet long.

The Khopesh was a slashing weapon, thanks to its thick, curved blade and was produced in several styles. One blade form employs a hook on its end to snare opponents, their shields or their weapons to pull them in closer for a killing blow. The other version has a fine point cast into its blade to stab opponents.

A composite version of the Khopesh combines a point with the hook, enabling its wielder to drag an opponent’s shield down before thrusting the point of their Khopesh into their enemy. A Khopesh is not a delicate weapon. It is designed to inflict devastating wounds.

Spearmen were the second largest contingent in a regular Egyptian army formation after its bowmen. Spears were comparatively cheap and simple to manufacture and it required little training for Egypt’s conscript soldiers to learn how to use them.

Charioteers also carried spears as secondary weapons and to keep enemy infantry at bay. As with arrowheads, Egyptian spearheads progressed through stone, obsidian, copper until finally settling on iron.

The battle-axe was yet another close-quarters combat weapon adopted by ancient Egyptians military formations. Early Egyptian battle-axes date back to around 2000 BC in the Old Kingdom. These battle-axes were cast from bronze.

The battle-axes’ crescent-shaped blades were fixed into grooves on long wooden handles. This created a weaker join than axes produced by their rivals that employed a hole in the head of their axes to fit the handle through. Egyptian battle-axes proved their worth in chopping through enemy shields used at that time before slashing unarmored troops.

However, once the Egyptian army encountered the invading Hyskos and the Sea-Peoples they quickly discovered their axes were inadequate and modified their design. Newer versions had a hole in the head for the axe handle and proved to be significantly sturdier than their previous designs. Egyptian axes were primarily used as hand-axes, however, they could be thrown quite accurately.

As most engagements the ancient Egyptian infantry found themselves in involved hand-to-hand combat, their soldiers often used maces against their adversaries. A forerunner of the battle-axe, a mace has a metal head attached to a wooden handle.

The Egyptian versions of the mace head came in both circular and spherical forms. Circular maces were equipped with a sharp edge used for slashing and hacking. Spherical maces typically had metallic objects embedded into their head, enabling these to rip and tear at their opponents.

As with the Egyptian battle-axes, maces proved to be very effective wielded in hand-to-hand combat. 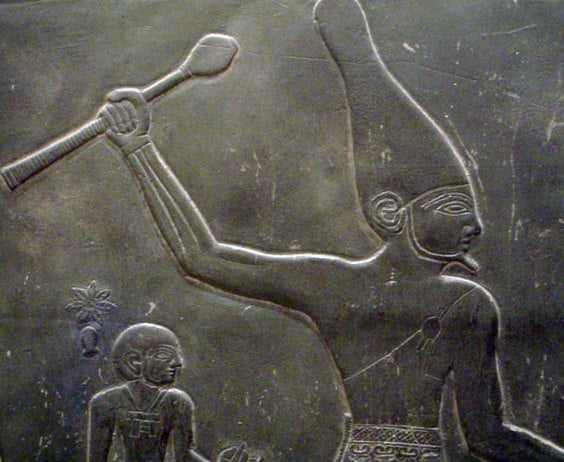 In their campaigns against their Pharaoh’s enemies, the ancient Egyptians employed a mix of personal protection and defensive weapons.

For the infantrymen, the most important defensive weapons were their shields. Shields were usually fabricated using a wooden frame covered with hardened leather. Wealthier soldiers, particularly mercenaries, could afford bronze or iron shields.

Body armour was rarely worn in ancient Egypt due to the prevailing hot climate. However, many soldiers opted for leather protection for their vital organs around their torso. Only the pharaohs wore metal armour and even then, only from the waist up. Pharaohs fought from chariots, which protected their lower limbs.

Similarly, the pharaohs also wore helmets. In Egypt, helmets were constructed from metal and were ornately decorated, to signify the wearer’s status.

Slingshots were common projectile weapons. They were simple to make, lightweight and thus highly portable, and required minimal training to use. Projectiles were readily available and, when delivered by a soldier proficient with his weapon, proved to be as deadly as either an arrow or a spear. 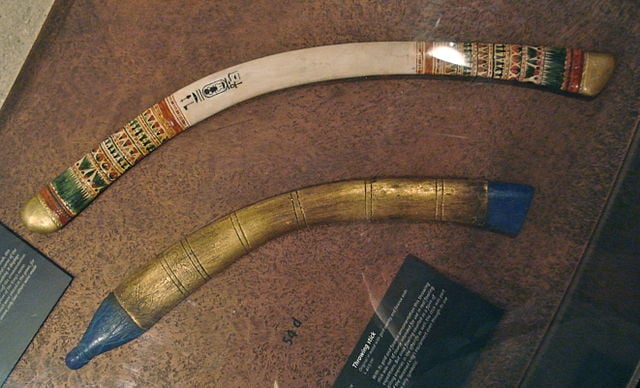 Did the ancient Egyptian’s slow pace of innovation in its weapons and tactics play a role in leaving them vulnerable to invasion by the Hyksos?