At the heart of ancient Egypt’s culture is the belief in a host of deities and the central role they played in everyday life and the immortal journey every human soul underwent in the underworld.

Ancient Egyptians believed in a diverse pantheon of gods and goddesses, around 8,700 divine beings in total. Some of these deities were well known, others remained obscure.

The more famous gods were elevated to state deities while others were closely associated with a region or a role or rite.

Ancient Egypt’s gods evolved from an early animistic belief system to one, which was imbued with magic and highly anthropomorphic.

Each deity had its own personality and traits, wore specific forms of dress and presided over their own domain. Each deity enjoyed a unique area of expertise but frequently became associated with several areas of human activity.

A just and benevolent king, Osiris was murdered by his brother Seth. Isis later magically resurrected Osiris. A revived Osiris became ruler over the underworld and judged the dead.

Each pharaoh became Osiris after death, while the pharaoh embodied Horus in life. Osiris was typically shown with green skin, representing renewal and fresh growth.

The ancient Egyptian god Isis was depicted as a woman holding an Ankh in her hand. Sometimes she was shown with a cow’s head or cow’s horns and a female body. Isis was worshipped as a fertility goddess. Isis was Horus’ mother and both sister and wife to Osiris.

Horus was a major ancient Egyptian god. He was Osiris and Isis’ son. By killing his uncle Seth and revenging his father’s murder Horus emerged as Egypt’s rightful king.

Egyptian pharaohs represented themselves as the incarnation of Horus, legitimizing their reign. Shown as a falcon-headed man wearing a white and red crown, Horus was also the god of the sky and light.

Ancient Egypt’s god of magic, writing and wisdom, Thoth is usually depicted with an ibis-head.

Thoth also acted as arbiter in ancient Egyptian myths between the opposing forces of good and evil. 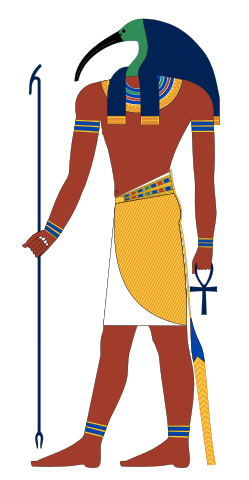 Ra or Re was ancient Egypt’s sun god and a powerful deity. He was linked to the pharaoh’s resurrection and pyramid building. At sunrise, Ra was symbolically reborn and died at sunset, after which he set off on his journey through the underworld.

Later, Ra was closely connected to Horus and was shown as a falcon-headed man wearing a solar disc on his head.

Seth or Set was the ancient Egyptian god of storms and the desert. Later he was connected with darkness and chaos. He was depicted in human form with a dog’s head, a long snout and a forked tail. He was also painted as a hippopotamus scorpion, crocodile and pig.

Seth became demonized with the Osiris cult’s growing popularity. Seth’s images were banished from temples although his worship continued in parts of Egypt.

Mother of Khons and wife of Amon, Mut was a major Theban god. Worshipped as their divine mother, Mut was shown as a woman with a red and white crown.

She was occasionally depicted with a vulture’s body or head or in cow form. Later Mut was absorbed by the Hathor cult and shown in cow form or as a woman sporting cow horns.

Bastet was the ancient Egyptian feline goddess. She was portrayed as either a woman with a cat’s head or as a cat. Bastet was Ra’s daughter.

She was often shown surrounded by kittens and was revered for her protective maternal, nature. As cats killed snakes, one of ancient Egypt most deadly creatures, Bastet was believed to be fierce when defending her litter.

Amun or Amon, or The Hidden One, headed the Theban pantheon of divinities. Revered as the king of gods Amun was mostly shown as a human but was also depicted with a ram’s head.

Later Amun was absorbed by the Ra cult as Amun-Ra, Egypt’s chief god.

Ptah was initially a local Memphis god but as Memphis’ reach spread across Egypt, his popularity grew.

Egypt’s creator-god, the deity of crafts and craftsmanship, Ptah appeared in mummified form with hands projecting through his bandages holding a staff carved with symbols denoting stability and dominion.

Wadjet was the protector of the pharaoh, the living Horus. She was venerated in cobra form and symbolised the pharaoh’s sovereignty over Egypt on royal regalia.

Wadjet was portrayed as ready to strike the pharaoh’s potential enemies. Images of Wadjet adorned with a sun disc or uraeus, formed a recurring emblem on the pharaohs’ crowns.

Wadjet was also painted as a woman with dual snakeheads. 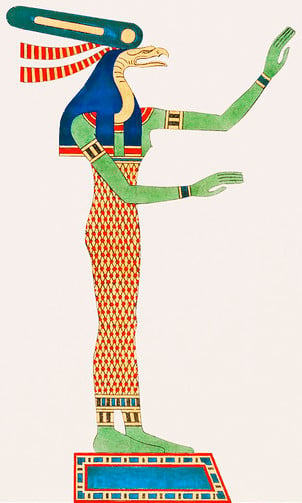 Hathor the ancient Egyptian cow goddess of music and dancing. Hathor’s titles included the Lady of Heaven, Earth and the Underworld. Popular with ancient Egyptians, Hathor was perceived as being gentle, wise and affectionate to the living and the dead alike.

Hathor guarded women throughout pregnancy and childbirth and was worshipped as Egypt’s fertility goddess. Hathor was depicted as a woman adorned with cow horns with an uraeus nestling between them.

Ancient Egypt’s powerful war goddess, Sekhmet was portrayed as a lion-headed goddess. Sekhmet was the Powerful One who destroyed Ra’s enemies and protected kings from their enemies.

Also linked with disease, health and medicine Sekhmet was depicted as a lion-headed woman or lioness. Her likeness often included a royal uraeus, symbol of the Egyptian pharaohs’ divine authority.

Anubis was the ancient Egyptian god of embalming, closely connected with their practice of mummification and the afterlife.

Guardian of the dead during their fraught journey through the afterlife, Anubis was depicted as a jackal-headed god with black skin, a colour connected with the Nile’s fertile gifts symbolising rebirth.

Anubis also participated in the Weighting of the Heart rite in the soul’s journey through the afterlife.

Maat personified harmony, justice, order, morality and truth. She was usually depicted as a woman with an ostrich feather on her head. This goddess symbolized the universe’s natural balance.

The divine Weighing of the Heart ritual described in the Book of the Dead was held in the Hall of Maat.

An ancient Egyptian goddess with the head of a crocodile, body of a leopard, and a hippo’s hindquarters she was the “Devourer of Souls.” Ammit sat under the scales of justice in the Hall of Truth in the afterlife and devoured the hearts of those souls judged unworthy by Osiris. 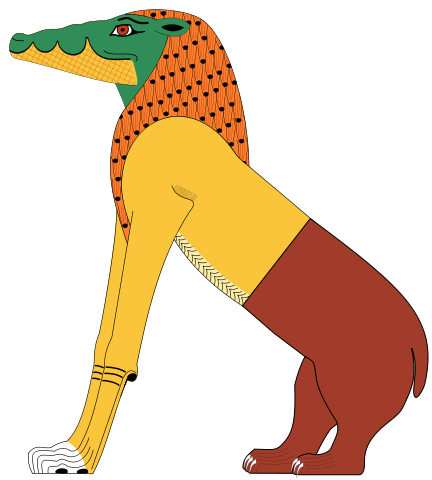 It was present at the dawn of creation and flew over the primordial waters to awake creation with its call. It was connected to Osiris via its rebirth myth. 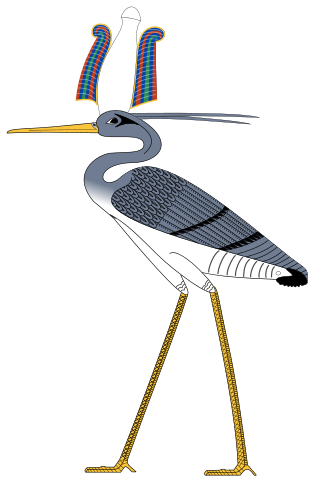 A surly boatman who ferried the souls of the judged dead across the Lily Lake to the Field of Reeds’ eternal paradise. Hraf-haf or “He Who Looks Behind Him,” was rude and unpleasant.

The soul had to be courteous in order to reach paradise. Hraf-haf is portrayed as a man in a boat with his head facing behind him.

The ancient Egyptian goddess of love, sexuality, fertility and war, Anat came from Canaan or Syria originally. Some texts describe her as a virgin while in others she is the Mother of the Gods. 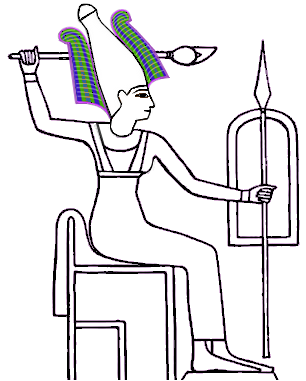 Egypt’s goddess of childbirth was one of its oldest deities. Meskhenet created everyone’s ka and breathed it into the newborn’s body. Hence Meskhenet determined people’s destiny via their character. Meskhenet comforted the departed soul at the judgment of the soul in the afterlife.

Ancient Egypt’s rich pantheon of gods and goddesses reminds us of just how vibrant and diverse the Egyptian people’s religious beliefs were and how they continued to evolve throughout the culture’s long history.

It’s all really interesting! Can’t wait to learn more! Thanks a lot!

This really helped , thanks !