The history of Ancient Egypt is rooted deep in religion and mythology. Its people relied heavily on the existence of its gods and goddesses.

As farmers, the Egyptian people turned to their divine for everything. Their undying faith in the afterlife was what framed most of Egypt’s architecture.

One of the most notorious gods was Ra, the god of the sun.

This deity had great influence, particularly in the 5th Dynasty. The Valley of the Kings, the location of the tombs that hold Egypt’s pharaohs, often portrays Ra’s sunlight in its artwork.

But it was The Eye of Ra, his female counterpart, who held the majority of his power. The following list explains the ten most fascinating facts about this feisty matron.

10. The Eye is Independent of Ra Himself

While the sun god Ra remains the iconic and almighty male god of the sun, The Eye of Ra represents his femininity. The eye is seen as an extension of Ra’s great power, but at the same time, she is entirely independent.

She remains loyal, fierce and autonomous, and has taken on a separate role than just that of Ra’s eye. Her power behaves as a self-ruling and all-knowing entity, who is incarnate of several goddesses throughout all of Egyptian Mythology.

These goddesses include Hathor, Sekhmet, and Bastet, along with others that play a strong feminine role. The Eye of Ra acts as a mother, a sibling, a consort, and a daughter of the sun god.

She has consistently played a part in the continued cycle that we associate with the dawning of a glorious new day. She is seen as a form of rebirth, a rising of the sun that spreads out over the land.

9. The Eye of Ra is Associated with Light

The Eye of Ra, as she is derived of the god of the sun, is associated with the illuminating presence of this majestic orb. The sun, as well as the moon, were often said to be the eyes of the gods and goddesses.

The Eye of Horus, which is similar to the Eye of Ra, is referred to as the moon, or the lunar god.

And because the Eye of Ra is often used in conjunction with The Eye of Horus, it is looked at as the solar eye. There are several gods and goddesses throughout Egyptian history, but Ra has almost always been deemed the ruler of the sun.

We see a sun-like disk that is portrayed in the historical architecture of the Egyptian people, usually with a red or yellow glow. These drawings consistently emphasize the importance of the sun in the culture and religious beliefs of its people.

The sun disk has been shown in different forms, usually convex or as a circle, and is usually drawn over the heads of several different gods who have links to the sun, predominantly Ra.

Some historians believe that this disk or sphere is envisioned as the physical form of Ra himself. So, much like the sun, The Eye of Ra is a source of great light and warmth and can also be equated with fire or with the magical appearance of a pink horizon.

8. The Eye of Ra Represents Procreation

She is the embodiment of Ra’s creative actions. Because she plays the role of a mother, she represents fertility and birth. The rising of the sun each morning has always been linked to Ra’s birth.

Drawings that depict Ra with the solar disk, imply it is believed to represent the womb. Ra often comes forth from the body of the sky goddess Nut. There are several depictions showing Ra as a child coming from the solar disk, perhaps with a placenta still attached. The Eye of Ra has gone by the name of Hathor, who is a goddess of the sky and the sun.

Hathor has a bond with Horus, the God who is associated with the heavens. Hathor’s relationship with Horus is quite similar to the relationship between Ra and his eye. Ra was sometimes said to enter the body of the sky goddess at sunset, viewed as a pregnancy and a rebirth occurring at dawn.

The eye is seemingly part of a suggestion that evokes creation and reproduction. While Ra gives birth to a daughter, she gives him a son and the cycle continues.

7. The Eye of Ra Offers Protection

The Eye of Ra is often the aggressor and is said to represent the destructive side of Ra. This is often looked upon as the sun’s massive heat. The sun disk, also known as the uraeus, is a symbol used to describe this power and is represented in many ancient Egyptian paintings.

The Eye of Ra’s aggressiveness extends not only to humans but to deities.  She embodies enormous violence throughout many of her appearances. But it is this violence that protects Ra against anything that may threaten his rule.

The lands of Egypt are notorious for being strident for its climate as well as its people. Many historical drawings and paintings throughout tombs have likened it to sharp arrows which may have been used to ward off evil. The Eye of Ra is associated with the spitting of fire or power, and the Egyptian people often used the uraeus to depict this dangerous power.

In several drawings we see the double cobra or uraei coiled around the sun, hence offering great protection. The Eye of Ra is looked at as a dangerous force that encircles the sun god and will stop at nothing to protect it.

6. The Eye of Ra Means Female

The Eye of Ra, for the most part, means the female counterpart of Ra. The eye represents femininity and mothering, while at the same time, the eye also means the presence of aggression and danger. This could be explained in the way an overprotective mother is viewed.

We often recognize the symbol of the Eye of Ra as a beautiful eye, outlined in black charcoal. This dark, sultry eye embodies a wave of seductiveness and mystery. Some have equated The Eye of Ra as a perfect example of the loving, caring mother who offers softness, while at the same time, if she is made unhappy, can be a benevolent woman who seeks ultimate revenge.

The Eye of Ra and The Eye of Horus look very much the same, and have been linked closely together in the belief system of the ancient Egyptians that goes back roughly 5000 years. The Eye of Horus, which belongs to the ancient sky god, is seen as part of the heavens, while Ra is associated with the sun.

There is an ancient myth in which a battle between Horus and the god Set took place. During this battle, Horus’ left eye was torn out.

Thoth, who is known as the Egyptian God of wisdom, restored Horus’ eye. It was at this point, that it was given the name Wadjet. This myth also shows the relation to the waxing and waning cycles of the moon. 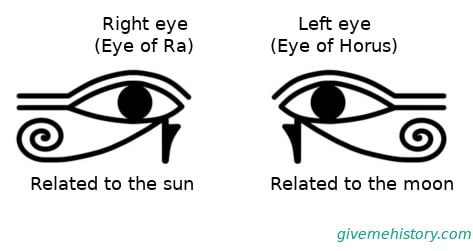 4. There are Several Myths Surrounding The Eye of Ra


So much of Ancient Egypt is made up of myths and legends and The Eye of Ra is no exception. In one myth, Ra discovers that his two children are missing. He sends his eye out into the world to find them.

The Eye is successful in finding the two children but upon their return, The Eye of Ra is filled with betrayal as a new eye has taken her place.

In turn, Ra gives her a place on his forehead in the form of a cobra. It is also noted that upon the return of his children, Ra sheds great tears, which give use to human tears. These tears are also associated with the flooding of the Nile, which in turn produced fertile farmland.

There is a myth associated with the destruction of mankind, when Ra is said to have used the eye as a weapon against all who have defied his authority. The eye takes the shape of the goddess Hathor, in the form of a lion, who is bent on the massacre of the human race.

Ra has a change of mind and prevents the eye from killing all of mankind. Red beer, which the eye believes to be blood, is poured out over the land. She drinks it in large quantities and returns to Ra as a subdued goddess.

The Myth of The Solar Eye tells the tale of the eye becoming upset with Ra and leaving. Perhaps she was upset because she was given a replacement when she was out searching for Ra’s children. Maybe she felt betrayed by Ra after her slaughter of humanity. In any event, with the solar eye gone, Ra is left vulnerable to his enemies.

This weakness is sometimes explained as the solar eclipse. The Eye of Ra is said to have wandered to several different lands, such as Nubia and Libya in the form of Mehit, a Goddess in the form of a wild cat.

She is difficult to control and deemed quite dangerous. In order to control her, the warrior god, Anhur, is sent to find her using his hunter skills.

However, she eventually does return to Ra and this return marks the beginning of the new year.

3. The Eye of Ra Takes on Many Forms


The Eye of Ra has been known to take on several different manifestations. Most importantly she plays the role of female divinity and has always been associated with many goddesses ranging from those with considerable importance to goddesses that play an archaic role.

The Eye of Ra has always been a symbol of great power and strength. She is often invoked in religious ceremonies and asked for her divine protection over people and their lands.

Through her mother like power and assertiveness, people often look to her as a protector of all that is sacred to them; not only their lands but their families and their wealth. Again this suggests the role of the domineering matriarch of the family.

1. The Iconic Eye of Ra Symbol


While the Eye of Ra is most known for inhabiting the iconic symbol of the sultry eye, outlined in black, there are many other conversations being had about how she can be represented. Some may argue that a form of two cobra’s surrounding the sun disk are best said to represent her. Others turn again to the symbol of the cat, which we see in so many of the paintings throughout Egyptian history.

Both the cobra and cat, especially a lioness, represent the powerful protector that is part of Ra and his eternal relevance to the Egyptian people.

If you enjoyed reading this article please leave a comment below and feel free to let us know if you think we missed any of the major facts about The Eye of Ra.

Juliana has been writing for close to thirty years. From her first publication in her junior high newspaper to her current writings on Tudor and Medieval history, writing has always been Juliana’s passion in life. Her work has been published in History is Now magazine, Matt’s History Blog, A Tudor Writing Circle.com as well as Tudor Dynasty.com. Juliana has also self published on Amazon.com. View Full Author Profile