To Egyptologists, the Pharaoh Djoser came to power during a time of immense development in Egypt’s history. Agriculture, trade, architecture, the arts, Egypt’s civil administration and their state theology all flourished during his reign.

These notable achievements made Djoser one of the Third Dynasty’s better-known pharaohs. While scholars have expressed reservations over dating Djoser’s reign, with different sources giving different dates. Djoser reign either extended from around 2686 BC to 2648 BC or 2667 BC to 2648 BC.

The Pharaoh also adopted the sobriquet ‘Netjerikhet’, or “body of the gods” during his reign. The name demonstrated the depth of the king’s belief that he was the earthly manifestation of the sky god Horus.

The disagreement by scholars over when Djoser ruled continued into a dispute around the length Djoser was actually in power. Egyptologists generally credit Djoser with reigning for either 19 or 28 years. 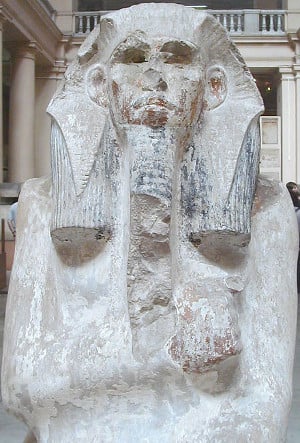 During Djoser’s dynamic reign he achieved a number of key exploits. Economically, he nurtured turquoise and copper mining at sites in the Sinai Peninsula, which brought wealth to his kingdom.

Militarily Djoser mounted several punitive military campaigns into the Sinai area to subdue troublesome locals. The Sinai acted as a buffer zone between unruly Asian peoples and Egypt. The success of these expeditions helped stabilize the kingdom and cement its economic power.

Complementing Djoser’s military legacy, which expanded his kingdom was his ambitions as a builder. During Djoser’s reign, he commissioned numerous construction projects. Indeed, one of the factors supporting Djoser’s claim to a lengthy reign was the sheer number and size of the monuments he left behind.

Djoser’s signature feat of construction and perhaps his most enduringly famous is his vast step pyramid. Other major construction feats initiated during Djoser’s reign were numerous temples and shrines, a great temple at Heliopolis, restoring the temple of Khnum, the ram-headed god of the cataract region on Elephantine Island, together with an incomplete tomb at Abydos.

This construction focus was complemented by Djoser’s support for the arts. The portraits and carvings of King Djoser illustrate the rise in the importance of the arts during this time and its continued advancement under his patronage.

Djoser enjoyed the respect of his people during his reign and centuries after his death, Djoser remained in high regard as demonstrated by the Ptolemaic Dynasty (332-30 BCE) Famine Stele, which recounts Djoser’s role saving Egypt from famine by re-building the temple of Khnum, the god of the source of the Nile, who was believed to be withholding his grace because his shrine had been allowed to fall into disrepair. As the story goes, once Djoser had finished restoring it, the famine was broken.

Djoser was the first Egyptian pharaoh to be viewed as not just a ruler, but as a god. Egyptian records make the first connection between the name Djoser and that of the Pharaoh Netjerykhet around 1,000 years after his death.

Egyptologists believe the king’s actual birth name was Djoser, which translates as “holy one”. Djoser ruled Egypt during the Third Dynasty of Egypt’s Old Kingdom, which began around 2650 B.C.

Unfortunately, accurate roll calls of kings covering this time do not exist, hence the actual dates and reigns of the Third Dynasty kings remain uncertain. However, researchers acknowledge Djoser as either the dynasty’s first or second ruler. Sources have Djoser ruling for between 19 to 28 years.

Djoser’s direct family line has been mostly lost over time. Today, his actual date of birth is unknown. Djoser is believed to be the son of Khasekhemwy (c. 2680 BCE) generally recognized by scholars as being the last king of Egypt’s Second Dynasty. His mother is thought to be the queen Nimaathap while his wife was Queen Hetephernepti, suspected to be Khasekhemwy’s daughter and thus his half-sister.

Some scholars maintain Djoser did not immediately succeed his father, as his brother Nebka ruled before him. Djoser had two daughters and no known sons. Sekhemkhet succeeded him to the throne and may have been related by blood.

The Step Pyramid of Djoser

Perhaps nothing has come to symbolize Egypt today in the minds of the public as much as its amazing pyramids. Perhaps ancient Egypt’s most famous monuments the pyramids continue to fascinate scholars and people alike to the present day.

These epic tributes to the memory of Egypt’s kings are synonymous with the country. Indeed, the evolution of the pyramid’s structure has been debated and documented for centuries.

However, one point remains irrefutable, these monumental undertakings followed in the footsteps of one colossal monument to one king designed by one brilliant architect. That monument was the Step Pyramid of Djoser at Saqqara. 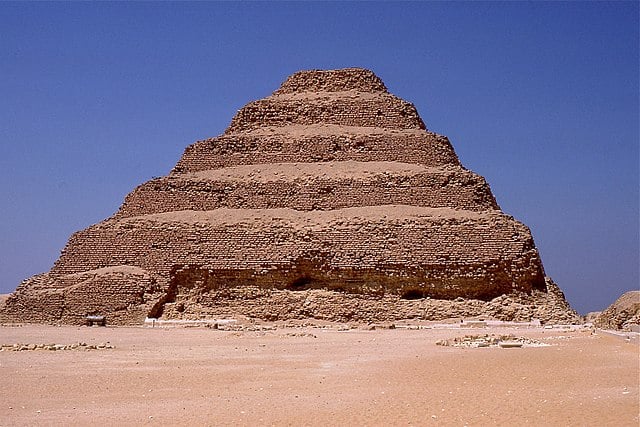 Not only was Djoser the first king of Egypt’s Third Dynasty, but he was also the first to build in stone. Prior to Djoser’s ascension to the throne, the customary mode of burial took the form of rectangular mastaba tombs formed from dried clay brick. These massive above-ground monuments overlaid the underground passages where the deceased king was laid to rest.

Djoser’s vizier Imhotep (c. 2667 BCE), for reasons, which still remain unclear, conceived of building a more impressive funeral monument and tomb for his king by stacking mastabas one on top of another, thus creating the familiar Step Pyramid we recognize today.

Thus was conceived the world’s first monumental stone building in history. It is a tomb worthy of the earthly manifestation of a god.

Djoser elected to break with established tradition and constructed his massive tomb in Saqqara.

The step pyramid’s primary purpose was to protect Djoser’s remains for all eternity thus securing his mummy along with his vast wealth. However, when Egyptologist Jean-Phillippe Lauer excavated the king’s burial chamber in 1934, he discovered only a mummified left foot and other fragmentary pieces of Djoser’s mortal remains. The tomb had apparently been robbed in antiquity.

While Djoser’s step pyramid had failed to protect his immortality, Djoser’s vision and the organizational skills required to construct such a colossal undertaking set the scene for succeeding generations of Egypt’s kings, creating a monument that lasted for the next 2,500 years of Egyptian history.

As completed, Djoser’s Step Pyramid soared 204 feet or 62 meters into the air and was the tallest structure on earth. A sprawling complex comprising courtyards, shrines, a temple, and living quarters for the resident priests spread out over 40 acres or 16 hectares and were surrounded by a wall 30 feet or 10.5 meters high. The wall had 13 false doors cut into it concealing its one true entrance. The entire outer wall was then ringed by a trench 2,460 feet or 750 meters long and 131 feet, 40 meters) wide.

Reflecting on the Past