An affinity for making and appreciating music is one of humanity’s defining characteristics. Little wonder then that the vibrant ancient Egyptian culture embraced music and musicians.

Music and musicians were valued highly amongst ancient Egyptian society. Music was believed to be integral to the act of creation and was essential for communing with their pantheon of gods.

Thanks for the Gift of Life

Scholars speculate that for the Egyptians, music was part of a very human response to showing their gratitude for receiving the gift of life from their gods. Moreover, music straddled all the experiences of the human condition. Music was present at feasts, at funeral banquets, at military parades, religious processions and even while farmers worked in the field or labored at the ancient Egyptians colossal construction projects.

This deep love of music by the ancient Egyptians is alluded to in numerous tomb paintings and on friezes carved into temple walls depicting musical performances, musicians and musical instruments.

While music is thought to have played a social role throughout Egypt’s history contemporary scholars translating papyri dating from the ‘pharaonic’ period of Egyptian writing point out that music appeared to have assumed greater importance during that period of Egyptian history.

Around 3100 BCE saw the Egyptian dynasties we know today firmly established. Music became a mainstay of many aspects of Egyptian society.

Gift of the Gods

While Egyptian latterly associated music with the goddess Hathor who imbued the world with joy, it was the deity Merit who was present with Ra and Heka the god of magic at the beginning of creation.

Merit helped to instill order on the chaos of creation through music. Thus, she was the primordial musician, singer, writer, and conductor of the symphony of creation. This established music’s place as a central element in ancient Egyptian culture.

The ancient Egyptians were as disciplined and structured with their music as they were with other aspects of their social order. As revealed in manuscripts, in tomb paintings and temple inscriptions, the ancient Egyptians gave music a prominent role in during religious practices. Music also accompanied its troops into battle and its farmers into their fields. Music was similarly performed in the many workshops supporting Egypt’s monumental construction projects and in the royal palaces.

Egyptians valued music in all of its forms both as part of their religious observances to honor their gods as well as a celebration of everyday life. Many images discovered to date show people clapping their hands, playing instruments, and singing along to the performance. Egyptologists translated ‘inscriptions’ placed underneath the images into lyrics for the song being performed.

Egyptian lyrics for some of their music praise their gods, their pharaoh, his wife and members of the royal family.

In religious terms, the Egyptian goddesses Bes and Hathor emerged, as the patron deities of music. Countless ceremonies were devoted to praising them. These ceremonies involved elaborate musical performances accompanied by dancers.

Egyptologists examining the wealth of ancient hieroglyphs bequeathed to us discovered ancient Egyptians developed a diverse range of musical instruments. Egyptian musicians could draw upon stringed instruments together with wind and percussion instruments. Most musical performances were also accompanied by hand clapping to keep rhythm while both men and women sang to accompany the music. 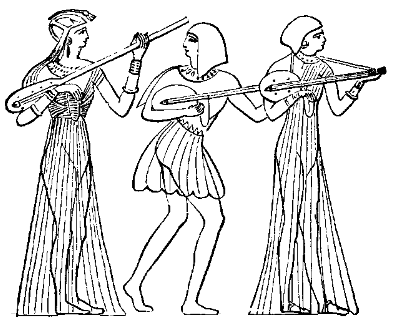 Ancient Egyptians had no concept of musical notation. The tunes were passed down orally from one generation of musicians to another. Precisely how Egyptian musical compositions actually sounded is unknown today.

Scholars point to the modern-day Coptic liturgy a potentially being a direct descendant of Egyptian musical forms. Coptic emerged as the dominant language of ancient Egypt during the 4th century CE, and the music the Copts co-opted for their religious services is believed to have evolved from earlier forms of Egyptian services in a similar way to how as their language gradually evolved from its ancient Egyptian and Greek base.

Ancient Egyptian hieroglyphics depict music as ‘hst’ this translates as “song”, “singer”, “conductor”, “musician”, and even as “to play music.” The precise meaning of the hieroglyph would be communicated by where it appeared in a sentence.

The ‘hst’ hieroglyph features a raised arm, symbolizing the role of a conductor in keeping time during a performance. Conductors, even of quite small troupes, appear to have enjoyed substantial social importance.

Tomb paintings found at Saqqara show a conductor with one hand over an ear to help his hearing and focus his concentration as he faces his assembled musicians and signals the composition to be played. Conductors in ancient Egypt are believed by scholars to have used hand gestures to communicate with their musicians based on modern interpretations of tomb paintings.

Performances were staged at banquets, in the temple complexes, at festivals, and during funerals. However, musical performances could be staged virtually anywhere. Members of high social rank regularly employed groups of musicians to entertain their guests during their evening meals and during social gatherings.

Many of the instruments discovered to date have been inscribed with the names of their gods indicating just how much the ancient Egyptians valued both their music and musical performances.

The musical instruments developed and played in ancient Egypt would be familiar to us today.

Their musicians could call on percussion instruments such as drums, tambourines, rattles, and the sistrum, a metal instrument shaped like a ‘U’ with small metal or bronze pieces hanging from it on leather straps, held in the hand. When shaken it produced a range of sounds, depending on which type of metal had been used.

The sistrum was linked closely with the goddess Hathor, consort to Ra and goddess of women, of fertility, and love, and of the sky. Sistra featured in performances by temple musicians and dancers during ceremonies for many gods in the Egyptian pantheon. Some sistra gave off a soft jingling sound, while others made a loud clanking noise. Bells and cymbals were adopted at a later time.

One distinctly ancient Egyptian instrument was the menit-necklace. This was a heavily beaded neckpiece which could either be shaken by a performer while dancing or removed or and rattled by hand, particularly, during temple performances.

Wind instruments appear quite similar to the instruments we play today. They included trumpets together with shepherd’s pipes, clarinets, oboes, flutes, both employing single and double reeds and some forms of flutes without reeds. 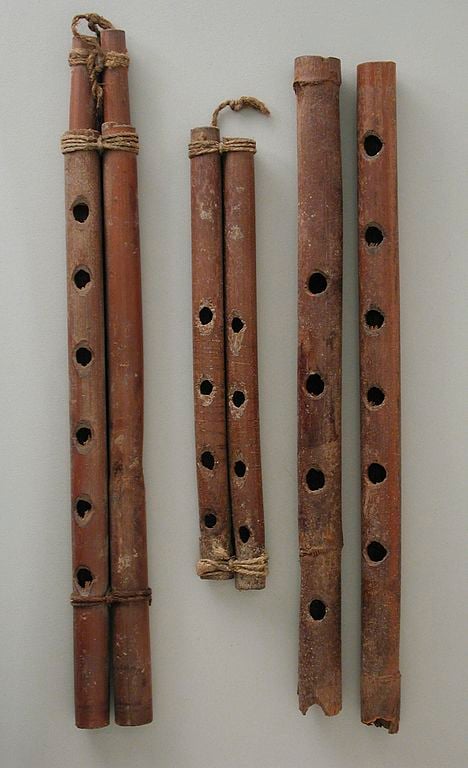 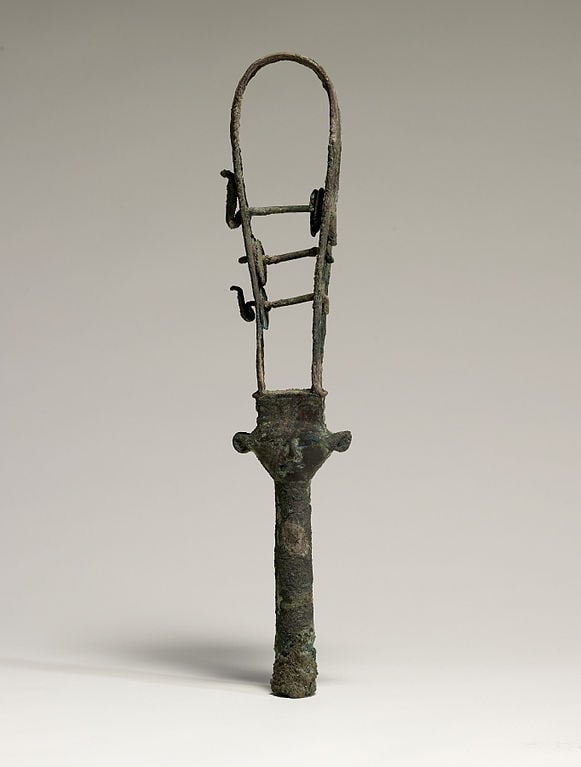 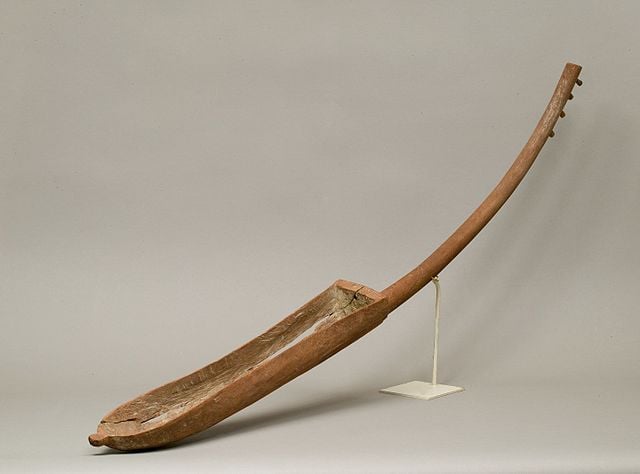 Musicians played these instruments either solo or as part of an ensemble, just as musicians perform today.

The Role of Professional Musicians

Ancient Egyptians employed numerous professional musicians who performed on a range of occasions. Given Egyptian society was structured into different social strata, this inevitably implied some musicians were limited to performing for events in keeping with their professional strata.

A musician enjoying high social status could perform during feats and religious ceremonies within the temple grounds, while a lower status musician might be limited to performing at community events and for local employers. 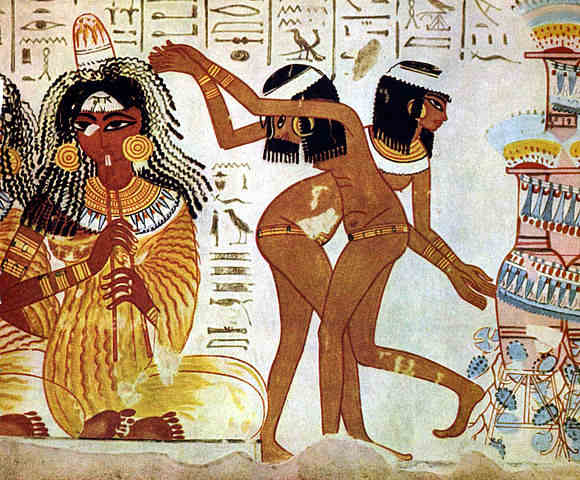 The highest rank an Egyptian musician could aspire to achieve was the station of ‘shemayet’. This rank imbued those musicians with the right to perform for the gods and goddesses. Shemayet status musicians were inevitably women.

The pharaoh royal family retained groups of eminent musicians for their personal entertainment and to perform on formal occasions. These included both musicians who played instruments as well as singers and dancers to accompany the musicians.

The people of ancient Egypt used their music to express their emotions and feelings. Whether praising the pharaoh and his family, their gods or simply celebrating the joy of everyday life music was a vital part of ancient Egyptian culture.

As the ancient Egyptians didn’t write down musical scores, what would their music sound like if we could hear it again today?